Our LiDAR analysis project is off to a great start: project volunteers have identified over 300 new possible archaeological sites in the NW area of the Machars alone! This week, we met online to review some of the highlights and discuss the identifying characteristics of prehistoric archaeology in our study area.

A selection of newly identified prehistoric sites in the coastal zone are shown below, along with our initial thoughts on their significance. 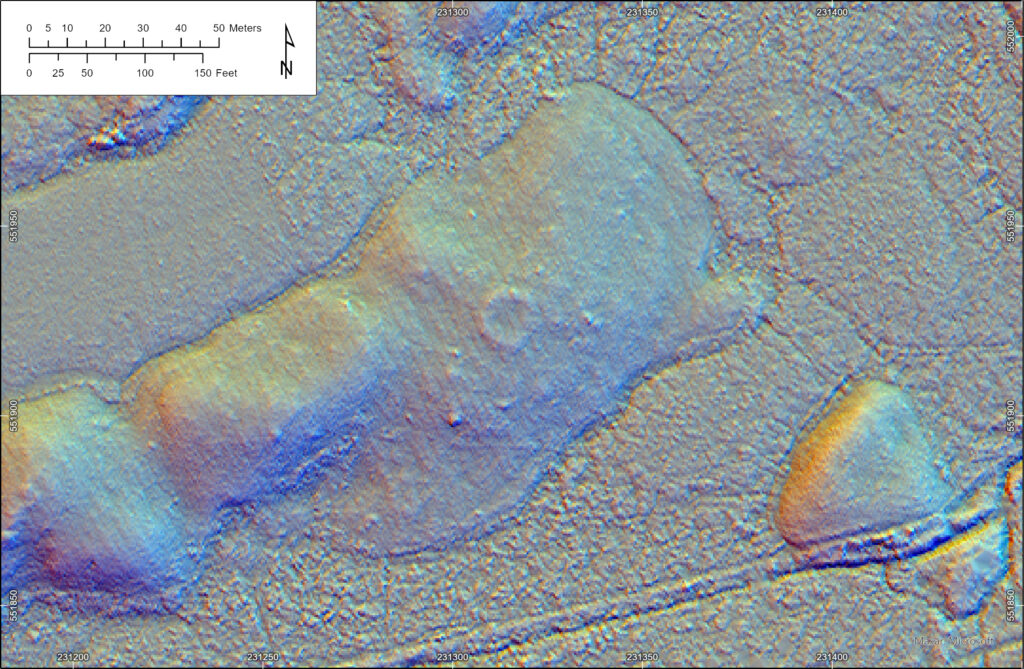 Some of the most frequently-spotted prehistoric settlements in the LiDAR dataset are circular banks referred to as ‘hut-circles’ by archaeologists. These first began to be built in western Scotland in the late Neolithic, but most examples date to the Bronze and Iron Ages, so in the last 2000 years BC. This is a great example: a classic ring-shaped bank in an area of semi-improved grazing. 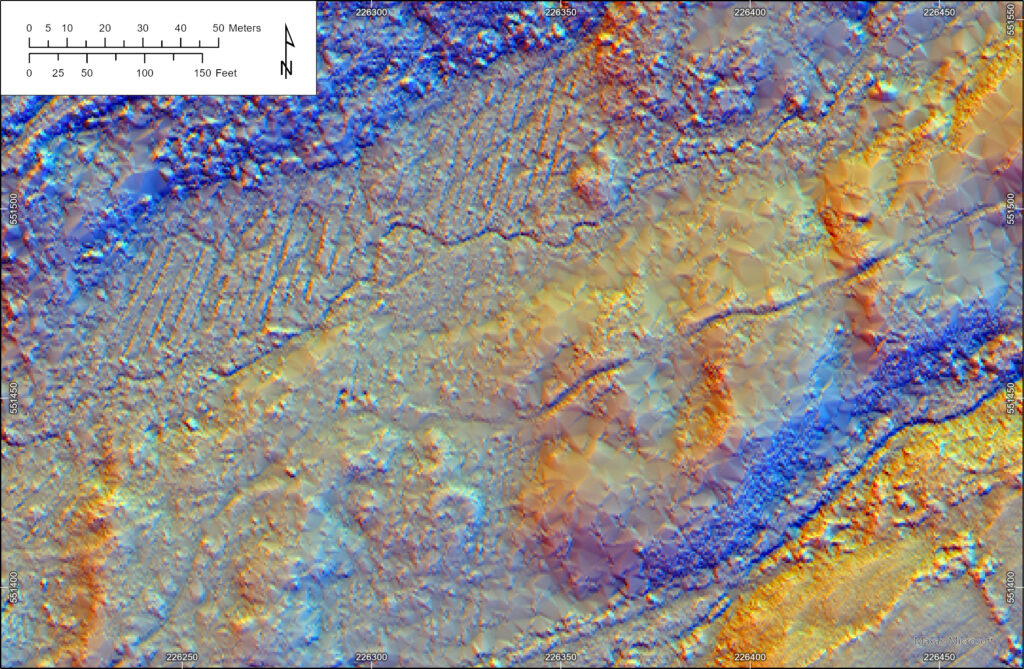 A probable hut circle and burnt mound in forestry

The same area as the previous image, showing the sites in conifer forestry

Some identifications came from areas now managed as forestry: the images above show the same area. In the top image, the LiDAR has seen through the trees to the bare earth below, and shows the remains of another probable hut circle and, on the north side of the stream in the upper part of the image, a possible burnt mound (visible as a ‘kidney bean-shaped lump). Burnt mounds are the by-product of heating stones in fire to heat water- their precise purpose is not known but they may have been associated with bathing or even as saunas. Most examples in Scotland date to the bronze age, typically between 1500 and 800 BC. 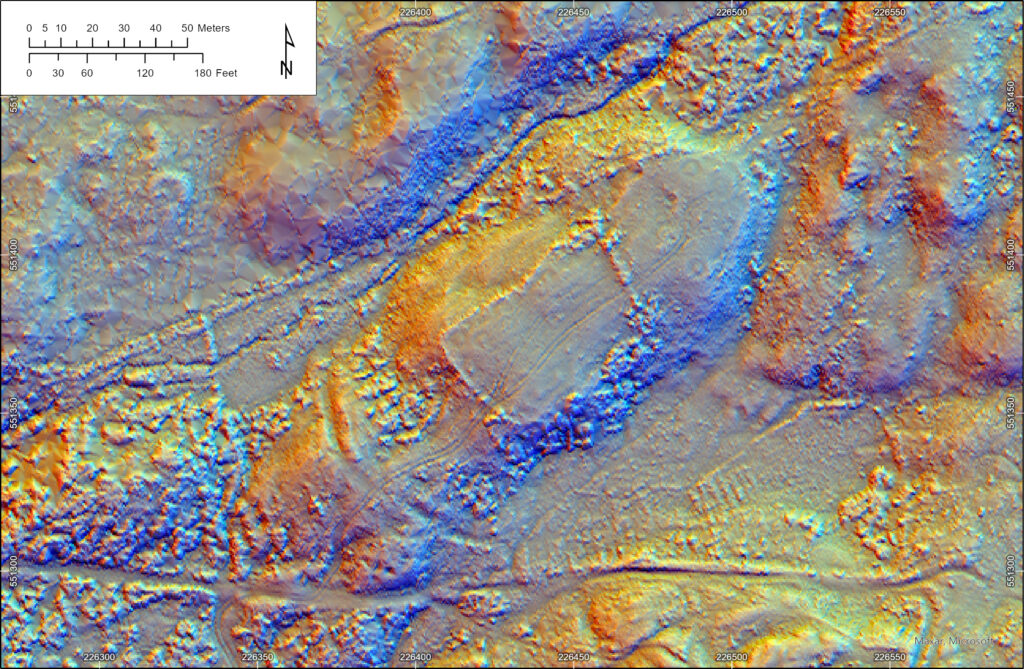 Close to the hut circles above, this raised ridge of land seems to be cut of by a deep curving ditch. Later agricultural remains are visible in the interior, including a rectangular enclosure and some circular scrapes caused by cattle feeder bins, but this earthwork might indicate the presence of a fort. If this is correct, it was likely built in the earlier Iron Age, between 500 and 0 BC. 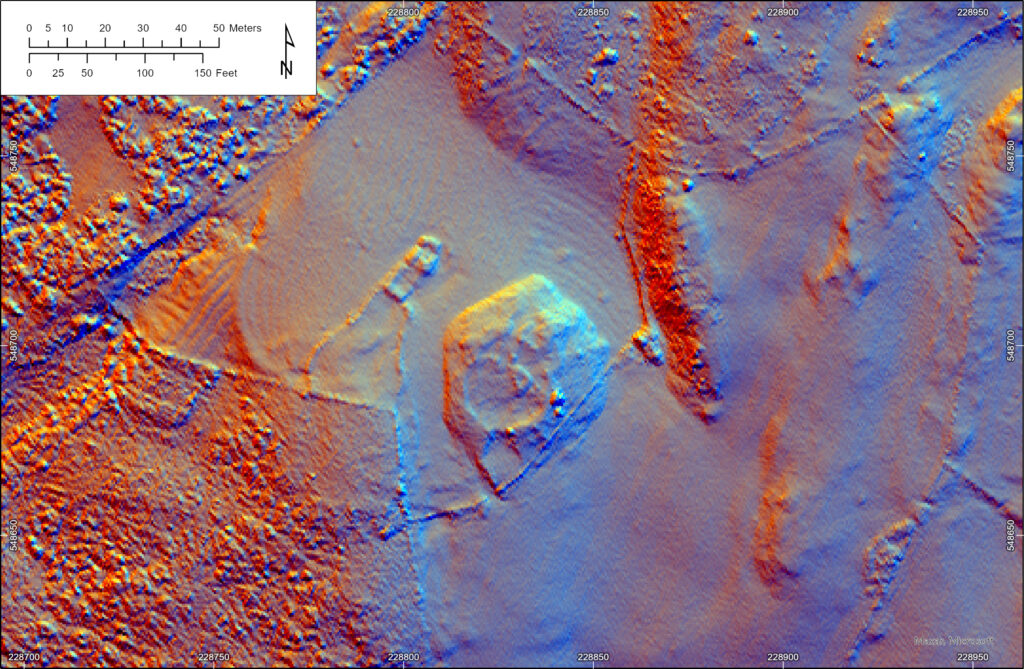 LiDAR can help us identify features that previously evaded detection. In this image, one of our volunteers spotted the large circular lump to the south-east of the later farmstead. It is very likely that this mound is the remains of a large stone settlement. Several others in the area are known and excavations have been carried out at two. Although they are undated, they were probably in use in the middle Iron Age, in the late centuries BC or early centuries AD. They are a very distinctive group of monuments found on the Machars west coast. 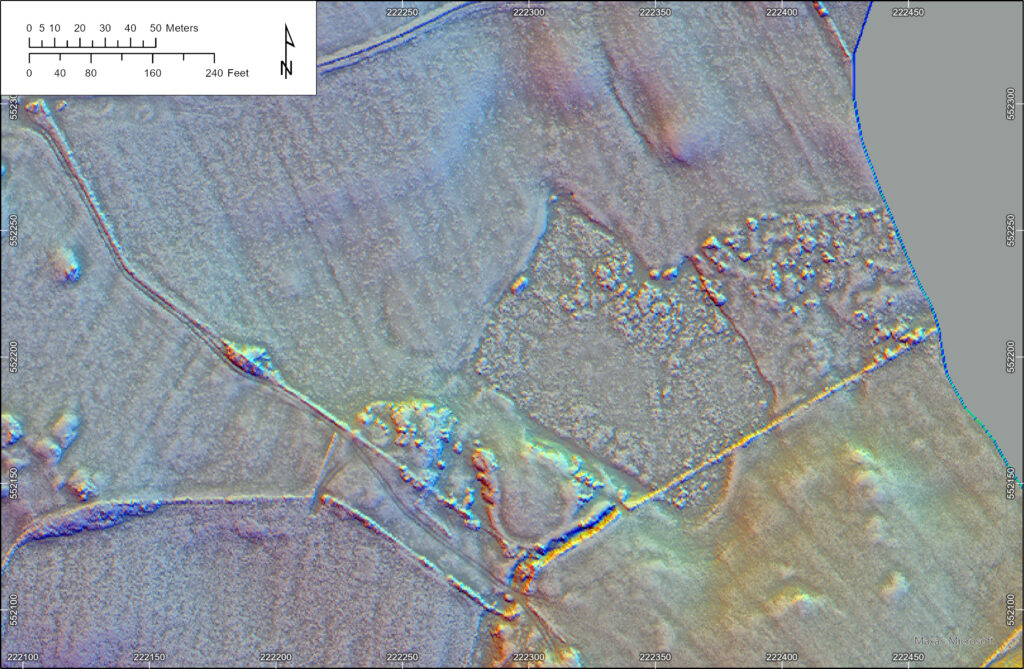 The site of a possible ‘crannog’ at Loch Sinniness

This site was well spotted by one of our volunteers. This is the partially-drained remains of Loch Sinniness. A possible crannog was noted here in the 19th century, but no evidence of it has been observed since; in this LiDAR image, a circular ditch in the wet ground, formerly part of the loch, is visible. It is likely that this is the site of the ‘crannog’, although in this case the settlement may have been surrounded by a ditch to create a moat-like enclosure in marshy ground.

The site is marked on the Ordnance Survey’s 1st edition 6-inch to the mile map. 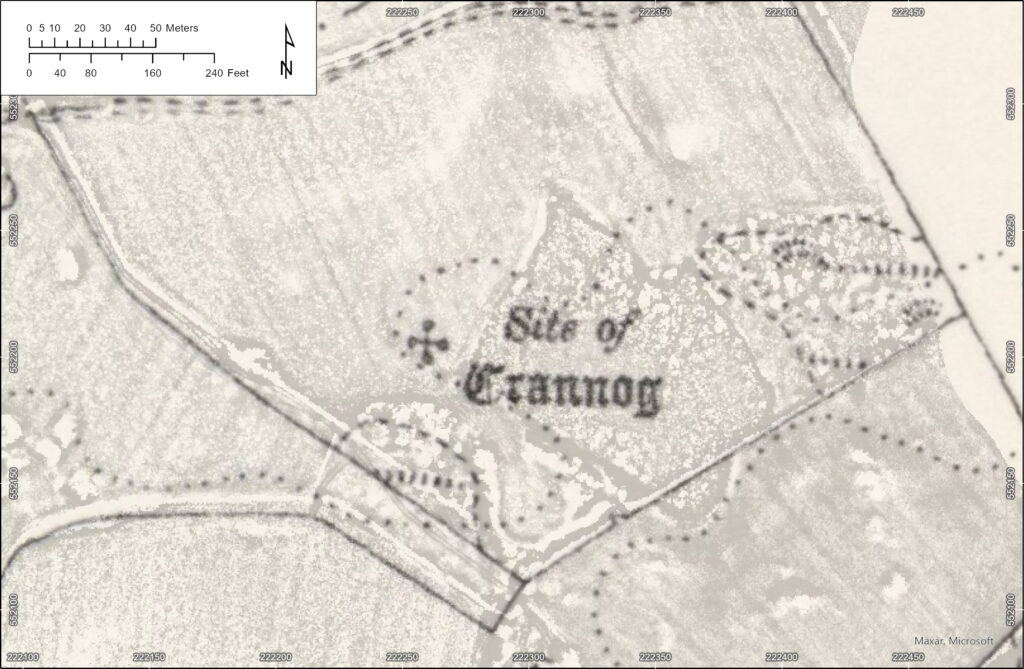 Your visit includes our chronological story of the development of Whithorn, the upper Gallery “Whithorn Cold Case” exhibition and special exhibition “Face to Face with Whithorn’s Bishops”, which is part of Scotland’s Year of Stories 2022; the ticket also includes access to the Iron Age roundhouse reconstruction via guided tour, and the Museum of early mediaeval carved stones. The crypts are currently closed to the public. All tickets are valid for one year.

12 months to give you access to our historic site at the Cradle of Christianity in Whithorn, as well as access to our exclusive online interactive timelines (Available from the 1st April 2021).

We use cookies on our website to give you the most relevant experience by remembering your preferences and repeat visits. By clicking “Accept All”, you consent to the use of ALL the cookies. However, you may visit "Cookie Settings" to provide a controlled consent.
Cookie SettingsAccept All
Manage consent

This website uses cookies to improve your experience while you navigate through the website. Out of these, the cookies that are categorized as necessary are stored on your browser as they are essential for the working of basic functionalities of the website. We also use third-party cookies that help us analyze and understand how you use this website. These cookies will be stored in your browser only with your consent. You also have the option to opt-out of these cookies. But opting out of some of these cookies may affect your browsing experience.
Necessary Always Enabled
Necessary cookies are absolutely essential for the website to function properly. These cookies ensure basic functionalities and security features of the website, anonymously.
Functional
Functional cookies help to perform certain functionalities like sharing the content of the website on social media platforms, collect feedbacks, and other third-party features.
Performance
Performance cookies are used to understand and analyze the key performance indexes of the website which helps in delivering a better user experience for the visitors.
Analytics
Analytical cookies are used to understand how visitors interact with the website. These cookies help provide information on metrics the number of visitors, bounce rate, traffic source, etc.
Advertisement
Advertisement cookies are used to provide visitors with relevant ads and marketing campaigns. These cookies track visitors across websites and collect information to provide customized ads.
Others
Other uncategorized cookies are those that are being analyzed and have not been classified into a category as yet.
SAVE & ACCEPT